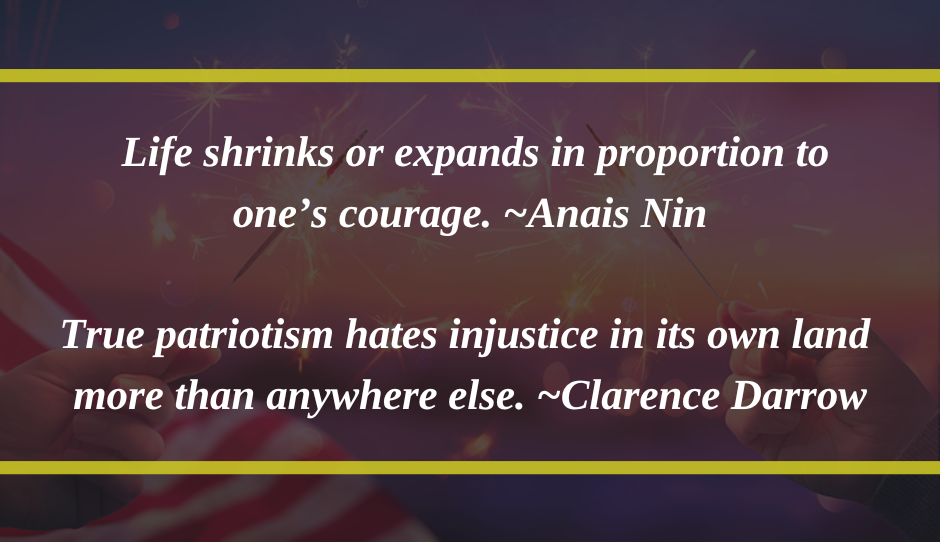 This year, on July 4, we celebrated our Independence as we have for over 200 years. Flags were flown and brilliant fireworks were on display in cities and towns across the nation. There were speeches too, of course. Discourse, or in some cases diatribes, on who is and who isn’t a patriot depending on which side of the political fence the speaker was on. And tragically, an iconic midwestern celebratory parade was disrupted by senseless sniper gunfire.

In these powerful and challenging times, I want to celebrate two UNSTOPPABLE women who I see as our finest examples of patriotism, U.S. Representative Liz Cheney, Republican of Wyoming, and former Trump White House assistant Cassidy Hutchinson. By speaking out against those who incited the January 6 insurrection, these women have shown courage, strength and a love for democracy—the very pillars on which our country was founded. And they have done so in spite of the repercussions to their personal safety and career trajectory.

Liz Cheney has represented her Wyoming district since 2018. She is no stranger to politics. Her father, Dick Cheney, was George W. Bush’s vice president from 2001-2009. He is perhaps best remembered for masterminding the Iraq war. While I do not share either father or daughter’s political beliefs, Cheney has earned my respect and admiration in her role as vice chair of the House committee investigating the Capitol riot of January 6, 2021.

Despite enormous obstacles and a barrage of negative press from supporters of the former president, she is relentless in her pursuit of the truth behind his and his advisors’ actions before, during, and after the attack. With an intense calm and a direct gaze, she steadily encouraged witnesses to be more forthcoming and specific throughout their testimony. However, she does so without badgering or maligning them; something we saw her senate colleagues do repeatedly in the hearing for Supreme Court Justice Katanji Brown Jackson.

Cheney leaves the histrionics to others, yet constantly reminds us what will happen if these people are not brought to justice. In a recent speech at the Ronald Reagan Presidential Library in Simi Valley, Calif., she said,

Cheney is also not afraid to speak the truth to her Republican colleagues, holding them accountable for complicity. In that same speech, she accused Republican leaders and elected officials of aiding the former president. “They have made themselves willing hostages to this dangerous and irrational man.” She warned, “Even after all we’ve seen, they’re enabling his lies.”

Not surprising, her fellow Republicans in Congress have denounced her as a traitor and removed her from GOP leadership.

She faces a Trump-backed primary challenger for her congressional seat in August, and the race is widely seen as an uphill battle for her. And yet she goes on. Liz Cheney is UNSTOPPABLE.

Think back to when you were 26. What were you doing? Moving through a string of jobs? Avoiding financial independence by remaining ensconced in your parents’ home? Sleeping in after late nights of partying?

Chances are you weren’t testifying in front of Congress. On June 28, 26-year-old Cassidy Hutchinson, former White House assistant to Trump’s Chief of Staff Mark Meadows, did just that.

For two hours, she sat before the House committee investigating the January 6 insurrection and calmly reported what she saw and heard that day from top White House officials and the president. Through her UNSTOPPABLE patriotism, Hutchinson did something her boss and many others more than twice her age and pay grade have refused to do.

I watched her unwavering control as she answered every question posed by the committee. She appeared comfortable—or as comfortable as I suspect one can feel under such conditions. There were no vocal utterances (uh, ums), hesitancy or fidgeting. I was awestruck by her confidence and calm as she unspooled the events of that day. In dramatic detail, but without the emotionality that her testimony might have evoked, she told the committee about an out-of-control president who was stoking the fires for what ended up being a violent insurrection.

I don’t know how she managed to stay so composed. Or, for that matter, how she found the strength to testify against Trump and Meadows for whom she once pledged an allegiance. She could have refused the committee’s request, pleaded the Fifth or withheld information to protect her boss and the former president. But she didn’t. Thankfully, her sense of justice took precedent and superseded politics.

Let’s hope that others are inspired by these UNSTOPPABLE women for the courage to come forth and tell the truth, wherever the truth is challenged.

During our lifetime, all of us face a number of difficult and frightening personal and professional situations. We have a choice in how we respond. We can either stay complacent within our comfort zone, or we can act with courage.

WHAT IF: You had an abundance of confidence and courage in your life? What would you do, what would you accomplish, how would you feel?

REFRAME IT: If you’re ready to live with more confidence and courage, here is a technique that’s been extremely helpful for both me and my clients.

Choose one thing you’ve been afraid to do. Start with something small. It could be a change in your diet, like eliminating sugar or alcohol, mentioning a mistake in a document your colleague has written, or speaking up about something you are not happy with in your everyday life. The possibilities are scalable and infinite.

After you’ve answered these questions, it’s always a good idea to consult a trusted friend, a counselor, or a coach to discuss your intended action. If appropriate, role-play the situation and get feedback on what you did well and what could be improved.

I recently participated in a short, impactful “Courage Assessment” co-created by my friend and colleague Kyle Hermans, CEO of Be Courageous, and the Psychology Department at State University of New York at New Paltz. The process was extremely thought-provoking, and I learned a lot about my inner resilience—and you may too. I encourage you to take this 5-minute survey and then share it with your network. Click here to take the survey for yourself. 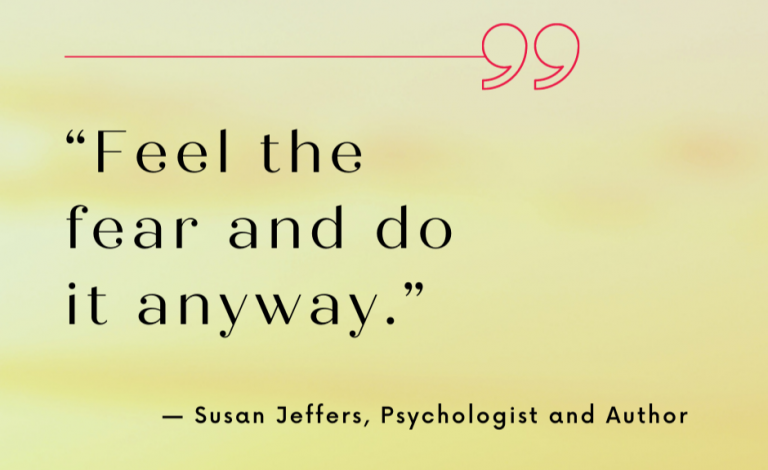 You want to feel safe and certain, to predict the future, and to be large and in charge. But, what in life can you be sure of? Change! One way to practice being more comfortable with change is to voluntarily put yourself in situations that are out of your comfort zone―where you are a beginner, making…